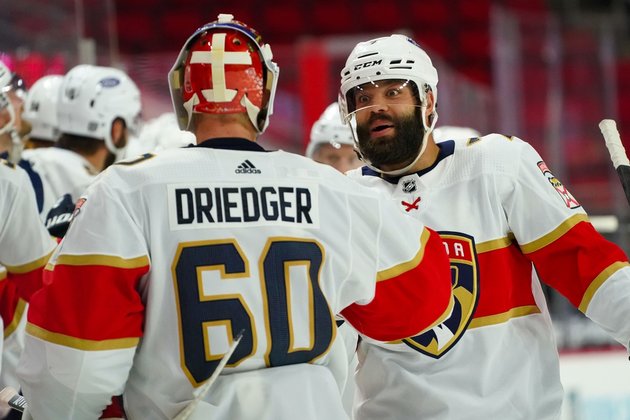 "We were pretty much in every game," Brind'Amour said after getting outscored 10-3 in their last three contests this week against the Tampa Bay Lightning, the last two on the road. "Obviously, there are areas we can shore up and get better."

The Hurricanes will hope to make progress in that regard on Saturday night when they visit the Florida Panthers, who lead the Central Division with 28 points. Carolina trails Florida by three points in a tightly packed top half of the division.

Florida is coming off a 3-2 win over the Dallas Stars on Thursday night.

That win for the Panthers created a sense of relief since Florida was less than seven minutes away from what would've been two consecutive shutout losses over a roughly 24-hour span against Dallas.

But that's when the Panthers came to life, scoring three times in less than three minutes, with goals by Aleksander Barkov, Anton Stralman and Frank Vatrano.

Barkov, who got a tap-in goal on a puck that had come to a stop behind the Stars netminder but was not in, said the Panthers' offense was due to ignite.

"The last 10 minutes, we were all over them," Barkov said. "It was just a matter of time. We finally got a lucky bounce."

The Panthers also got a good game from Sergei Bobrovsky, who improved to 6-2-1 with a 3.05 goals-against average. Bobrovsky, who has split time with backup Chris Driedger (7-2-1, 2.18 GAA) this season, stopped 37 of 39 shots for a .949 save percentage. It was the most saves by a Panthers goalie this season.

"I'd call that a goalie win," Panthers coach Joel Quenneville said of Bobrovsky. "He was excellent."

The Panthers beat the Hurricanes in their only meeting so far this year, prevailing 4-3 on Jonathan Huberdeau's overtime goal.

Similar to the Dallas game on Thursday, the Panthers trailed 2-0 against the Hurricanes before charging back for the victory. Driedger made 32 saves to earn that win.

"It was a big response by us," Huberdeau said after that game. "We didn't panic."

"The way we finished the game was disappointing," Hurricanes forward Jordan Staal said. "We were in control, but we let them back in the game with sloppy play."

Huberdeau leads Florida in assists (16) and points (23) this season. Barkov and Patric Hornqvist are tied for team's goals lead with eight each.

Sebastian Aho leads Carolina in assists (11) and points (17). Former Panthers All-Star Vincent Trocheck is tied for Carolina's team lead in goals, as he and Nino Niederreiter have nine each.

Carolina entered Thursday's Lightning game ranked seventh in the league in power-play percentage. But the Hurricanes were 0-for-5 with the man advantage.

Florida, meanwhile, played Thursday's game without veteran defenseman Radko Gudas (upper-body injury). In his place, Kevin Connauton made his Panthers debut and was impressive -- 20:26 time on ice and a plus-two rating.

"The guys stepped up," Bobrovsky said. "I have tremendous belief in this team."