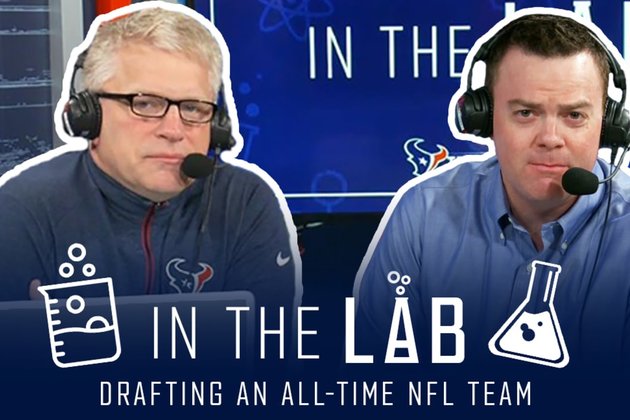 Last week I drafted a team with Jim Brown, Reggie White, Lawrence Taylor and Deion Sanders on it.

This week, I added Ray Lewis, Walter Payton and Mean Joe Greene to the mix.

Yes, it's weird, but weird is what happens when John Harris and I huddle each week for our 'In the Lab' podcast. We're smack dab in the middle of drafting an All-Time NFL squad, where you get to choose just one player from each of the 32 franchises. Because I took Payton, I can't add Dick Butkus at linebacker. Also, there's no double-dipping on a player. Since I drafted Sanders the Falcon, Harris can't draft Sanders the 49er, or Sanders the Cowboys, etc.

With 32 teams, we broke the draft into four rounds, and you can check out the results of the first round right HERE.

On Tuesday, Harris and I were back at it. We each had eight more picks to make, and I led things off by bolstering my offensive line.

DD 9: OG Gene Upshaw, Oakland/Los Angeles/Las Vegas Raiders - Perhaps the greatest Raider ever, Upshaw started every game from 1967 through 1980, helping guide the Raiders to a pair of Super Bowl titles. He was an All-Pro five times, a member of the All-1970's team, and went into Canton in 1987. I needed more offensive line help, and I got the best Raider ever to help me. Win, win.

JH 9: WR Randy Moss, New England Patriots - This one stung me, and took me by surprise. I'd planned on taking Moss the Viking and pairing him with Calvin Johnson on my offense. But Harris went with the Moss who teamed with Tom Brady to light up defenses in between 2007 and 2010. Harris also leaves Brady, tight end Rob Gronkowski and guard John Hannah there for me. Each of those three, it can be argued, was the best ever at their respective positions.

DD 10: CB Darrelle Revis, New York Jets - When looking at each franchise's best, that makes things both a little easier and trickier in this entire exercise. Quarterback Joe Namath is still THE guy most associate with the Jets, and understandably so. But I think I'll find my quarterback elsewhere. I'm tempted by wide receiver Don Maynard, and perhaps Joe Klecko or Mark Gastineau on the defensive front, but Revis the lockdown corner seemed like the simplest, smartest choice. I pair him up with Sanders, and it'll be tough to throw on my defense. Revis was an All-Pro four times, picked off 29 career passes, despite the fact that he was avoided for a large chunk of his career. He also recovered a dozen fumbles.

JH 10: S Larry Wilson, St. Louis/Arizona/Chicago Cardinals - With 52 career interceptions to his name, Wilson is a solid pick by Harris. The Cardinals retired his number, and he was an All-Pro every year between 1966 and 1970.

DD 11: LB Ray Lewis, Baltimore Ravens - I was tempted by safety Ed Reed and left tackle Jonathan Ogden, but ultimately I went with Lewis. He won Defensive Player of the Year twice, was All-Pro seven times, had over 2,000 combined tackles in between 1996 and 2012, and came away with the ball 51 times when you add up his 31 interceptions and 20 fumble recoveries.

JH 11: LB Derrick Brooks, Tampa Bay Buccaneers - John's ears pricked up when I took Lewis, so he decided to snap up a linebacker to pair with Kuechly. Brooks is the man, and he's a worthy choice because the 11-time Pro Bowler gobbled up tackles on a very formidable defense from 1995 through 2008. He started 13 games his rookie year, then started every contest after through the end of his career.

DD 12: RB Walter Payton, Chicago Bears - When I was little, the Oilers weren't very good. I was just a baby and toddler during the Luv Ya Blue days, and then I was 10 when the Run n' Shoot group started peeling off wins and playoff appearances. During the early and middle 1980's, Payton and the Chicago Bears were on TV a lot, and he was one of my favorite players. When he left the game, nobody had rushed for more yards. He failed to gain 1,000 yards as a rookie in 1975, and the strikes in 1982 and 1987 limited him to 596 and 533 yards, respectively. The other 10 years? He averaged 1,492 yards per season. 110 career touchdowns on the ground, another 15 as a receiver, and eight more as a passer. He's in my backfield, no questions asked.

JH 12: S Ed Reed, Baltimore Ravens - Reed logged 64 career picks, and he returned seven for scores. He took two of his career 13 fumble recoveries to the house. Reed's one of the most impactful defensive players of all time.

DD 13: K Morten Andersen, New Orleans Saints - Yeah, yeah, yeah, I know. "WHAT ARE YOU DOING, DRAFTING A KICKER??!?!?!" Because I want one. As you'll see later in the Draft, I'm going to get versatile with the punter position and not take a true punter. But if I'm in a tight game, I don't really want a regular player kicking. So I went with the Hall of Famer who spent 25 years in the NFL. Yes, I know there are better Saints I could've chosen, but they're not appreciably better than the players I can get off other teams at those positions. Drew Brees is great, but he's not in my Top 4 of quarterbacks I'm going to choose. The same goes for all the great New Orleans linebackers over time.

JH 13: DE Bruce Smith, Buffalo Bills - This is one of my major blunders: I forgot to snap up Smith somehow. He's the guy I wanted from Buffalo, and he fit a position of need that I still could fill. Harris gets a legend here, the League's all-time sacks leader with 200. He won Defensive Player of the Year twice, and in his prime years from 1986-1998, he pumped out double-digit sack seasons like it was nobody's business. In that span--minus the 1991 season in which he was injured-- he averaged just over 14 sacks a year.

DD14: DT Mean Joe Greene, Pittsburgh Steelers - I'm plopping one of the most frightening players in NFL history right next to Reggie White and LT on my defense. Greene won the Defensive Player of the Year award twice in the early 1970's, and was the lynchpin of the Steel Curtain defense. Sacks weren't officially credited in his day, and he played on the interior of the defensive line, but he's unofficially credited with 78.5 in his career.

JH14: CB Darrell Green, Washington - John's first cornerback is one of the fastest men to ever play the game. Green picked off 54 passes in his career and returned six of them for scores. He also recovered 10 fumbles, and took two of them to the house.

DD15: S Ronnie Lott, San Francisco 49ers - This choice was one of my toughest. Jerry Rice at receiver would've been an obvious one, as would Joe Montana at quarterback. Easily one of the most agonizing picks. But I went with Lott because I don't have a safety yet, and he's maybe the best to ever do it. He also played some corner. Lott came up with the ball 80 times in his career--63 picks and 17 fumble recoveries--and he also forced 16 fumbles. He's a great anchor at the back end of the defense.

JH15: WR Jerry Rice, San Francisco 49ers - Harris basically rubs it in my face taking Rice here. Now he has 'The G.O.A.T.' along with Moss catching passes. Good thing I have a great secondary. But yikes: nobody has more catches, yards or receiving touchdowns than Rice. He had double-digit touchdown catch seasons NINE times between 1986 and 1995. He finished with 1,500 receiving yards or more in four seasons, and had another two in which he finished with over 1,400 yards.

DD16: TE Travis Kelce, Kansas City Chiefs - Kelce appeared in a single game his rookie year of 2013, and didn't catch a pass. But starting the next year, he's averaged 1,126 receiving yards and seven touchdown catches per season with the Chiefs. He's done that with Alex Smith and with Patrick Mahomes, and he's been a headache for opposing defenses. He'll fit in quite nicely with my offense.

JH16: RB/K/P Paul Hornung, Green Bay Packers - Harris got the "Golden Boy", who can kick and punt, and contribute on offense and defense. Hornung was the NFL MVP in 1961, and in his career, he ran for 50 touchdowns, caught 12 more, and also passed for five scores. Hornung kicked 66 field goals, and 190 extra points, too. The Heisman Trophy winner at Notre Dame in 1956, he also punted some in college. Harris might call on him to do that here.