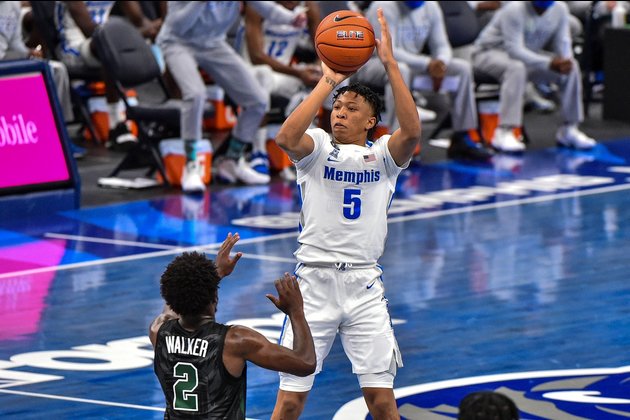 Memphis has won four consecutive games and heads into what looks like another favorable matchup on Sunday afternoon when it travels to Cincinnati.

The Tigers have not won a conference title since capturing the Conference USA regular season and tournament crowns during the 2012-13 season - the year before they moved into the AAC.

But it would take Memphis sweeping its final three games against the Bearcats, South Florida and Houston and a little help as the Tigers try to upend the Cougars and Wichita State.

Unfortunately for the Tigers, the road got tougher on Friday when the conference shifted the site of their finale against Houston to the Cougars' homecourt. It's also unlikely the Tigers will be able to reschedule a postponed game against Wichita State since it would create a stretch of four road games in eight days.

"It is important that we remain consistent with established conference protocols in similar situations, although I will admit to being very frustrated that a more creative solution could not be realized," Memphis athletic director Laird Veatch said.

The Bearcats (9-8, 7-5) are averaging 69.2 points per game, led by Keith Williams' 14.4 points and 4.0 rebounds per game. Williams and David DeJulius have formed a potent combo for Cincinnati with the latter averaging 10 points, 5.1 rebounds and 4.6 assists.

Cincinnati shook off a 90-52 drubbing at Houston by winning back-to-back games against Tulsa and Tulane this past week. The Bearcats enjoyed a rare blowout victory after five of their first six conference victories were decided by three points or less.

"I told them after the game, 'There's nothing wrong with winning by 10 or 15,' because at this point in the game, I'd like to sit down and just watch the last two minutes," Cincinnati coach John Brannen said after the team's 70-69 win over Tulsa on Wednesday.

Landers Nolley II (13.4 points per game) leads Memphis in scoring, and has been sharp both from 3-point range (39 percent) and the free throw line (83.7 percent).