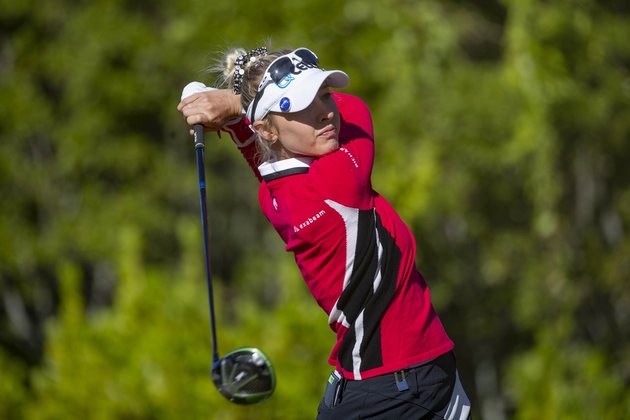 Florida native Nelly Korda stayed steady with her second consecutive round of 4-under 68 to grab a one-shot lead after Round 3 at the Gainbridge LPGA in Orlando.

Korda, who stands at 13-under 203, holds a narrow advantage over Thailand's Patty Tavatanakit, who fired a 66 on Saturday at Lake NonaGolf Country Club and stands at 12-under.

"I really like it," said 22-year-old Korda, regarding the Lake Nona track. "Honestly, my home course I play at every day is Concession, which PGA Tour players are at this week. Kind of reminds me of it. ... But I really like it. It's a very pretty golf course and hopefully treats my right tomorrow."

It took a few holes for Korda to get any momentum, going six holes before getting birdies at Nos. 7 and 9. She made three birdies over a stretch of five holes on the back with the only blemish being a bogey at the par-3 13th.

"Any time you can get ahead of the pack going into Sunday is a positive," said Korda, a three-time LPGA winner. "There are some good players there, so it'll take good golf to win."

Angel Yin carded the low round of the day -- a 7-under 65 -- to stand tied for third place at 10-under with South Korea's Jin Young Ko (66) and New Zealand's Lydia Ko, who shot even-par 72 after holding the lead for the first two rounds.

"I felt like it could have been a little bit better," said Lydia Ko, a 15-time LPGA winner who calls Lake Nona home. "Had pretty much one bad hole, but other than that I felt like I played pretty solid. Wish more putts could have dropped, but it's going to be -- it's pretty tough out there, so hopefully just be able to keep playing solid and give myself good opportunities tomorrow."

Annika Sorenstam, who is playing on the LPGA Tour for the first time since the 2008 ADT Championship, ballooned to a 79 on Saturday and is alone in 74th - last place in the field. Sorenstam had four bogeys on the front, four on the back and one lone birdie on the par-4 14th.

"It was a hard day at the office, as they would say," said Sorenstam, 50, winner of 72 career titles. "Just didn't happen at all today. I was trying really hard but just short-sided myself on a lot of holes. ...

"It was a rough day, but happy to be here, happy to be playing and just kind of hang in there. Just, again, the purpose is to get experience, so I was trying to follow my routine and do everything I do on every single shot. I did that, so I'm pleased about that part."

Defending champion Madelene Sagstrom of Sweden shot 74 on Saturday and stands T-64 at 3-over.