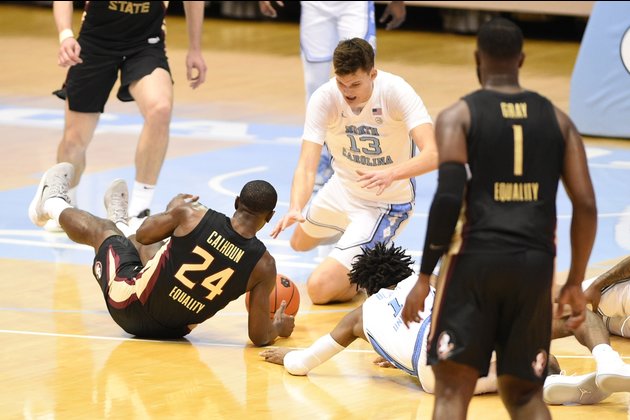 Freshman Walker Kessler cranked out a season-high 20 points and North Carolina stormed back from a miserable first-half stretch to defeat No. 11 Florida State 78-70 on Saturday in Chapel Hill, N.C.

Kerwin Walton added 13 points and RJ Davis and Caleb Love both posted 12 points as North Carolina's top four scorers were freshmen. Kessler, who shot 9-for-10 from the field, had a team-best eight rebounds.

Williams became just the fourth coach in Division I men's history with 900 wins along with Duke's Mike Krzyzewski, Jim Boeheim and Bob Knight. He also became the fasted in D-I history to reach that milestone in 1,161 career games.

Florida State (14-4, 10-3), which had a four-game winning streak halted, was trying to put a firmer grip on first place in the ACC.

Davis hit a 3-pointer to send the Tar Heels to a 55-50 advantage. Kessler made the next two North Carolina baskets, the latter with the center out front on a fast break as the margin ballooned to 59-52 with less than nine minutes to play.

The Seminoles had a chance to cut the deficit to one, but Barnes botched a breakaway opportunity as Love was credited with a blocked shot just before the four-minute mark. The Tar Heels converted with Armando Bacot's dunk at the other end. Florida State never got closer than four points the rest of the way.

Kessler hadn't scored more than 10 points in a game this season.

Florida State bolted to a 16-point lead late in the first half and took a 41-29 edge to the break. North Carolina had only one field goal in the last three minutes of the first half but avoided a disaster with four late free throws.

It was the first home game of the season with fans -- other than a few dozen family members -- for the Tar Heels after state restrictions were relaxed just two days earlier. A crowd of slightly more than 3,000 was on hand for what was the fourth consecutive home game for North Carolina, which has gone 3-1 since a dud at Virginia.