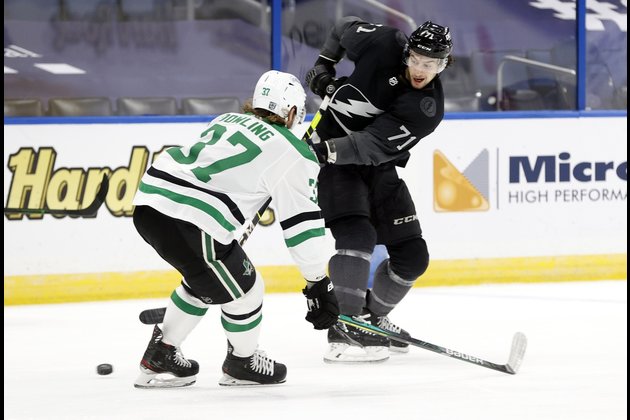 Vasilevskiy, who blanked Carolina on Wednesday, recorded the 23rd shutout of his career, saving all 45 shots in the two whitewashings.

Steven Stamkos and Anthony Cirelli each produced a goal and an assist, and Ondrej Palat, Pat Maroon and Brayden Point scored. Tyler Johnson and Mikhail Sergachev recorded two helpers each for the Lightning, who won their fourth straight.

By going 2-for-2 on the power play and also tallying short-handed, Tampa Bay completely dominated special teams play to improve to 9-1-0 at home and finish February with a 10-3-0 record.

After two stellar performances this week against Florida -- a 49-save outing Monday and his 10th career shutout two nights later -- Anton Khudobin allowed five goals on 17 shots and was replaced by Jake Oettinger early in the third after Stamkos' goal.

Palat opened the scoring after the puck caromed around after a faceoff to the left of Khudobin. The left winger corralled it and popped in his eighth marker at 13:18 for a 1-0 lead while on the team's lone power play of the period.

Cirelli made it 2-0 at 4:06 of the second when he started on a breakout with Stamkos while short-handed, took a pass at the offensive blue line and deked a backhander past Khudobin for his first goal since Feb. 8 in Nashville -- his fifth this season.

Point wheeled through the slot past defenseman Andrej Sekera and buried his seventh goal at 8:17. Maroon's power-play marker from Johnson gave the home side a commanding 4-0 lead after two periods.

The clubs will play again Tuesday in Dallas in a rescheduled contest that was originally slated to be played on Feb. 18 but postponed due to freezing temperatures in Texas.

In all, they had four games against each other postponed because of weather or COVID-19.